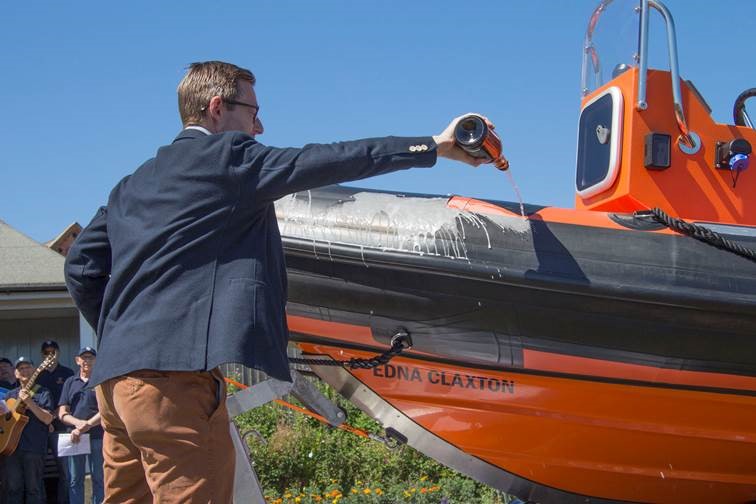 There is a lot for Mundesley Volunteer Inshore Lifeboat to be celebrating this year.

The Service was established in 1972 following a tragic incident the year before, which resulted in the drowning of one man and the near-drowning of another man and his wife whilst sailing off Mundesley beach. It was felt that Mundesley needed its own rescue boat and so, with a borrowed boat, Mundesley Volunteer Inshore Lifeboat came into being.

And 50 years later, it is going from strength to strength.

On Sunday 10th July, Sea Sunday, a service of dedication was held on the cliff top for our new boat, the Edna Claxton. This new boat, which has been built for us by Goodchild Marine of Burgh Castle, has the benefit of the latest technology to aid the Crew. It has been named for a generous benefactor and the ceremony was performed by the MP for North Norfolk, Duncan Baker.

The boat will now be returning to Goodchild for sea trials and should be in service later this year.

Mr Baker also presented the Queen’s Jubilee Medals to the eligible crew. The medals are presented to volunteer frontline emergency service personnel who have been dealing with emergencies for at least five years.

Following the dedication service, members of the Crew both past and present, Directors and Friends of Mundesley Lifeboat were invited to an afternoon tea to celebrate their 50 year history.  While stories and memories were being shared, the Pot of Gold Shanty Crew provided a suitably nautical entertainment.